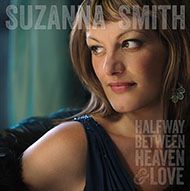 A debut album by a smart jazz singer with a lithe, lissome sound is always welcome, but when the artist is also a strikingly effective songwriter, a celebration is in order. With the release of Halfway Between Heaven & Love, Oakland-based Suzanna Smith delivers one of the year’s most impressive vocal projects, an intoxicating mix of original tunes and beautifully rendered standards.

Accompanied by some of the most creative figures on the Bay Area scene, Smith combines the confessional imperative of a singer/songwriter with the rhythmic acuity of a jazz chanteuse. She wrote the lyrics for nine of the album’s 13 tracks while collaborating on the music of five songs with pianist/keyboardist Michael Coleman. Smith’s material more than holds its own alongside the American Songbook gems.

Recording an album focusing on original songs wasn’t Smith’s initial game plan. Long tempted to release a session of standards in response to requests by fans, she ended up taking her time and working steadily with a core group of players. Without quite realizing what she had accomplished, she gradually honed a program of emotionally incisive tunes featuring her well-crafted lyrics. 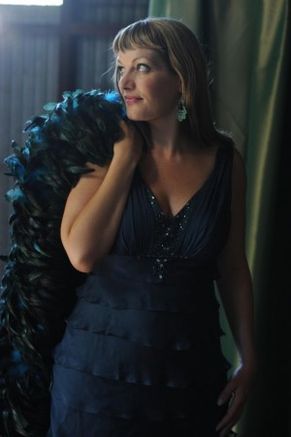 “It was very intentional, but kind of an accident,” Smith says. “From the first rehearsals it took about two years until we finally went into the studio. I’ve been so busy performing, and mostly when I perform I don’t do this material. So I was chipping along at this and I didn’t realize what I was building up. It allowed me to turn around and be pleasantly surprised.”

The album opens with a graceful bebop medley as Smith’s clever lyrics link Tadd Dameron’s “Lady Bird” and Miles Davis’s “Half Nelson.” Featuring the album’s core trio with Coleman, bassist Brandon Essex, and drummer Hamir Atwal, the piece immediately establishes Smith as a singer of rare poise and presence. While it isn’t always obvious, more than half the CD showcases her originals, songs that often feel like jazz interpretations of classic pop tunes.

A sassy affirmation of love, “Paper Boat” surges over a rollicking groove buoyed by Michael Coleman’s organ, while Rob Ewing’s growling trombone and Jordan Glenn’s fills on washboard contribute earthy textures. Smith fell in love with Coleman’s tune “The Man That Broke the Dragon’s Heart” and added a lyric that turns his evocative title into a sweet but sad parable guided by Michael O’Neill’s serpentine clarinet work.

One might be surprised to discover that “Planes and Trains” isn’t a tune from a 1940s Hollywood production. A gentle ode to the lightning-strike transformative power of romance, the loping ballad is one of Smith and Coleman’s most winsome collaborations. “Comet,” on the other hand, pulses with 21st-century urgency, offering a soliloquy of regret and self-recrimination to a bouncy groove accented by the fiery strum of Ken Husbands’s bouzouki.

The album’s poetic title comes from a line in the appropriately named ballad “Monk’s Make Believe.” Smith’s wistful lyrics fall just right on Coleman’s dreamy, slightly off-kilter Monkian melody, with the line “halfway between heaven and love” wafting in so smoothly that it takes a beat to realize it’s not a familiar saying. For Smith, the key to the original pieces was “coming up with a way to approach the songs as if I didn’t write them. It’s easier for me to improvise the phrasing and melody of songs that I don’t write. So in addition to digging in and evoking the emotional space I wrote these songs from, I wanted to improvise on them as I would with a jazz standard.”

After making a compelling case for her smarts as a songwriter, Smith shows she’s an equally savvy interpreter of standards. The standout track is pianist/drummer Kelly Park’s irresistibly grooving arrangement of Michel Legrand’s “Summer Me, Winter Me,” a revelatory performance that captures Smith’s singular combination of sunny optimism and rueful wariness. She gives free rein to the latter mood on a lovely but forlorn version of “Alone Together,” while projecting unfettered joy on Arlen’s celebratory “Hooray for Love.” Smith closes the album as she started, with an original lyric set to a modern jazz gem, evoking the jaunty swagger of Dexter Gordon on his Latin swinger “Soy Califa.”

“I’m always looking for ways to play within the boundaries of a song’s ‘container,’” Smith says. “I think of songs as rooms and the longer you live in them, the more you can move about without bumping into things. I love when I reach that point with a song.

“I don’t have a big belting voice,” she adds. “When I sing, I want to make sure that it’s clear, that the listeners can really hear the song. With the standards I try to have fun with the song. I don’t feel they need to go to outer space.”

One explanation for the maturity of Smith’s sound is that she’s no ingénue. She’s spent the last decade building relationships with players, honing her repertoire, and performing hundreds of gigs where she learned to thrive in the unforgiving crucible of the bandstand. Guided by some of the West Coast’s finest jazz vocalists, including Kitty Margolis and Laurie Antonioli, she has emerged as a startlingly fine singer with a repertoire that’s wholly her own.

Born Sept. 25, 1974 in Boulder, Colorado, Suzanna Smith grew up in Livermore, a small city east of San Francisco. Eager to sing even as a child, “to the point my parents were telling me to be quiet in the back of the car,” Smith says, she joined the choir at Livermore High, and the chamber chorale, and performed in several musicals, though never in a starring role. 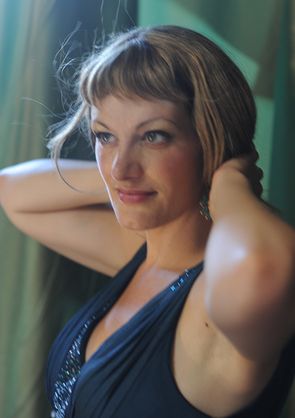 While studying computer science and studio art at Wellesley College she found time to get deeply involved in the a cappella scene, a passion that she brought back to the Bay Area after graduation. She had grown up listening to Ella Fitzgerald and classic big bands, but her post-collegiate musical interests ran more toward singer/songwriters like Martin Sexton and Ani DiFranco.

After performing around the region for several years in a five-woman ensemble, she eventually decided to pursue vocal studies at the Jazzschool in Berkeley, where she worked closely with Antonioli, Madeline Eastman, Maye Cavallaro, and Stephanie Bruce. In addition to pursuing classes at the Jazzschool, Smith also studied privately with Margolis, resulting in a unique mentoring relationship between the two vocalists. In fact, Margolis is listed as a co-producer on Halfway Between Heaven & Love.

“I arrived at the Jazzschool mostly because I was looking for a situation that could lead to performing,” Smith says. “It turned out that from doing a cappella my ear could really latch on to the harmonies. Jazz became such a deep well to dive into.”

Her initial love of Ella led her to Anita O’Day, who dazzled with rhythmic agility and an exuberant sense of swing. She studied Shirley Horn and Sarah Vaughan, and started paying particular attention to the great vocal tunesmiths Peggy Lee and Blossom Dearie.

As she gained confidence, Smith started sitting in at open mics, beginning with the Purple Onion in North Beach. But by far the most important venue was Kelly’s of Alameda, a popular but defunct jazz spot run by Kelly Park. By 2005, she was sitting in twice a week and had caught the ear of the club’s proprietor, who invited her to put together an evening of music. Within a week Park had invited her back, and she started performing at the club every other Friday. She held the slot down for over a year, an experience that provided invaluable training and an extensive network of musical contacts.

“Kelly always hired the musicians, so most Fridays I didn’t know who was in the band,” Smith recalls. “It was very scary, and my stomach would flop every Friday afternoon. I worked with some great pianists, and some terrible players and learned how to survive that. In hindsight I met a whole slew of players and didn’t become dependent on any one player in particular, like a lot of new singers do. I understood from early on the concept of jumping in and getting it done with anyone.”

Smith’s reputation spread with a monthly gig at San Francisco’s Savanna Jazz, where she also produced and hosted a monthly vocal jam session that ran for three years. She has also performed at many of the region’s top clubs and venues, including a long-running every-other-week gig at Zingari Ristorante in San Francisco's Hotel Donatello. But she forged her most consequential musical relationship at Kelly’s, working often with Michael Coleman.

A mainstay on the Bay Area jazz scene for the past decade, Coleman has worked extensively in jazz and pop settings, from left-of-center improvisers like saxophonist Aram Shelton and drummer Sam Ospovat to singer/songwriter Sean Hayes and jazz vocalist Rebecca Griffin. He leads several bands of his own (the tuneful quartet Arts & Sciences and percussion-driven CavityFang) and contributes to the collective bands Beep and Schimscheimer Family Trio with drummer Jon Arkin (heard on Smith’s CD) and saxophonist Kasey Knudsen.

Coleman witnessed Smith’s development first-hand, and notes that she acquired her jazz chops “the old-fashioned way, nose to the grindstone, working a lot. From when I first started playing with her she’s matured into a really impressive, self-assured musician, capable of jumping into any situation.”

When she’s not singing, Smith works as a product designer for web and mobile applications. She lives in Oakland with esteemed jazz vocalist Kenny Washington and their young son Miles. “This has been a big year for me—having a baby and working hard to release this album. It almost feels like I’m giving birth to two babies. It has been fascinating to see the meanings of my songs shift in the years since I first wrote them. The songs continue to apply, just in new ways, to all the changes in my life. It has also been powerful to see them become personal anthems for other people’s life experiences.”